Skullsplitter is a complex that includes three works: Dilemmas Accumulate, The End of Dying and Skullsplitter, released in Vienna in 2019. All works are based on the medium of the artist's book, radio play and electronic music.  The three texts are based on a research project conducted in Tokyo between 2015 and 2016, and 2018/2019. The buildings of Metabolistmus, in particular the Nakagin Capsule Tower by Kisho Kurokawa, were studied. During the trip, diary entries, interveiws, and dream logs were created. After the trip, the collected records were converted into literary forms. In the process, they were moved to other places and times in three books. Field recordings and music created on site were further edited and audio pieces were recorded to accompany the texts.  All pieces have a similar linguistic structure: in inner monologues we accompany subjects as they experience various places in total isolation. Language and with it all thinking and important cognitive processes begin to dissolve. Senses of time and spatial perception disappear and the "dreaming" of places takes over from an initially, merely registering perception.

Three drawers, in each one a book edition, a radio play and a sound/music project 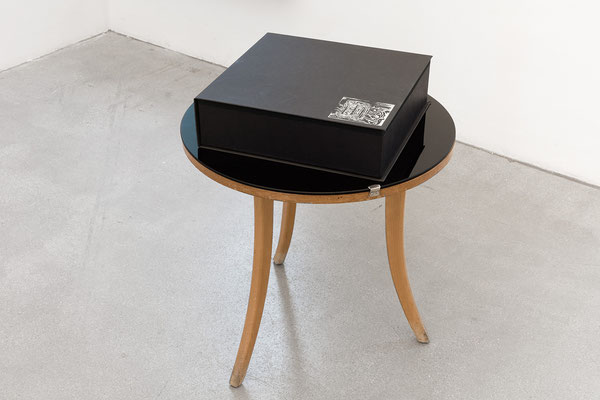 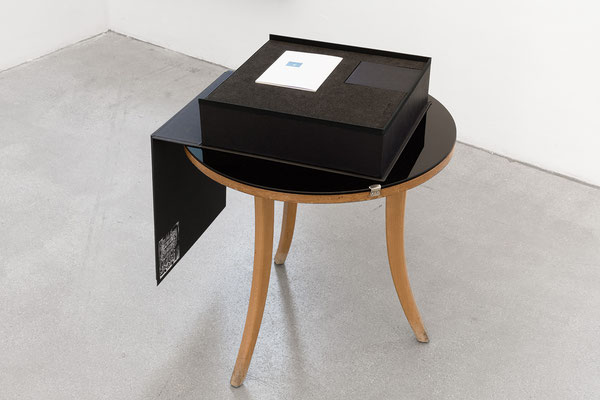 In Dilemmas Accumulate we encounter an astronaut who seems to suffer from amnesia. He finds himself in total solitude in a space station in Earth orbit. Over the course of three chapters, the narrator is confronted with the loss of language. Practically word for word, he loses the terms for what he is experiencing. Space/time terms become taboo (above, below, past). With the language the last barrier between his consciousness and his environment falls. The relationship with the space station begins to erode and thoughts fall apart into a system of delusions.  Dilemmas Accumulate consists of three books, each describing a state of the person, a video work, which is shown together with the radio plays in the room, and a radio play.

II. The End of Dying

The End of Dying is the result of research on the dying shopping malls of the late 80s/90s, both in Tokyo and in Los Angeles The results in the form of images and texts are brought into reaction with the theme of the fever dream. Certain phenomena typical of the fever dream, such as Miropsia/Macropsia, i.e. the false perception of sizes and above all differences in distance, slowly become the basis of all perceptions of a protagonist. A book, a radio play in two languages (En/De), a music production, which at the same time provides the soundtrack to the radio play, are the result of this experiment, along with a series of prints.  As in Dilemmas Accumulate, the text represents an inner monologue, based on the artist's own and others' dream protocols. Over a period of seven "days," the dreamer descends into a negative landscape, unaware of the reason for his/her being in that place. The only other person is a young boy. It is not known if the boy is real or just a fold in the personality of the person dreaming. The bases on which the dialogues are created seem to be constantly changing. Listeners seemingly relive the traumatic experiences of young people in places completely foreign to them.

THE END OF DYING had its premiere at the Institut für Betrachtung/Dublab in Cologne.  The English version what was performed together with an in situ installation at Dublab Los Angeles.

Skullsplitter is the log of a person who seems to work like a technician on an offshore platform. We learn that the location is an offshore server system and is located in the middle of the Pacific Ocean. Over the course of three chapters NO WORD FOR, DARK SPAM, and BLACK SPAM, the subject develops a conflicting knowledge of the nature of the place where she is located.

The subject is confronted with a growth of background processes such as temperature changes and impossible day/night cycles. The patterns of these changes seem completely obscure and artificial. The subject slowly loses important, subject-constituting terms such as I, me, etc., and slowly but surely begins to lose sight of the distinction between dream, daydream, and reality. With SKULLSPLITTER, the trilogy of the same name comes to an end.

Skullsplitter premiered in 2020 at the Quartier am Hafen Festival in Cologne. Afterwards it was shown at the Institut für Betrachtung-Radio, Dublab, the Raum mit Licht, Vienna, at the Buchstäblich series at Papier und Gelb/EXC Düsseldorf and at Schwanenmarkt 1 in Bochum.